On the 21st of March, Theresa May announced that as the deadline for Brexit was agreed to be on the 29th of March 2019, both herself and EU leaders have agreed to a delay plan. This means that the UK will be offered a delay until 22 May, IF… MPs approve the withdrawal deal negotiated with the EU next week. However, this may be shortened to the 12th of April, allowing the UK time to get the deal through or to “indicate a way forward”. The PM said that there is now a “clear choice”, for MPs to vote for or against her deal for the third time.

In other news, the organisers of a campaign known as “Put It To The People”, have stated that apparently, 1,000,000 people turned up to their march before rallying in front of Parliament. The apparent protesters were raising EU flags, claiming that any future Brexit deal should be put to a people’s vote. Some notable people who attended the rally included Labour’s deputy leader Tom Watson, Scotland’s First Minister Nicola Sturgeon, London Mayor Sadiq Khan, former Tory turned independent MP Anna Soubry and former attorney general, Dominic Grieve. 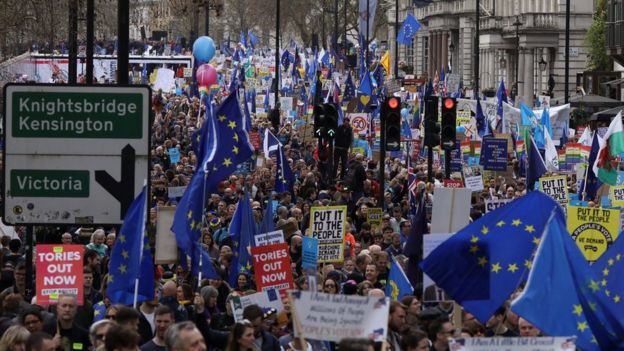