Back in February, I visited Berlin with my family for my Dad’s 50th. The trip overall lasted about 3 days which was enough to see the political and historical side of what the capital of  Germany has to offer. From the Reichstag to Museum island (very creative), it was evident why this city is one (if not the) most historical capitals of Europe.

There was nothing much to talk about on the first day, we touched down in Berlin around midday so no one felt like exploring right off the bat, and even doing that seemed like a challenge on the first day at the airport we landed at was about a 40 min train ride. I can recall two changes until we arrived at Alexandra Platz (Where we were staying) in our air BnB apartment which wasn’t all too far from the city centre.) 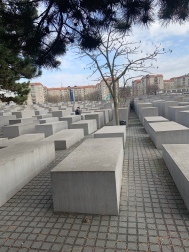 All that happened that day that was significant, was that we went out to try about the Berlin local cuisine in a bar not too far from the hotel. Later in the evening, we went to a nearby supermarket to stock up on food for the following 2 days.

I’d say the second day of my trip arguably had the most to see, this is mainly due to the fact that we were booked on a fat tires bike tour around the city. On this, we were able to see the most of what Humboldt to offer.

The first site that really piqued my interest was the Jewish Holocaust memorial in Berlin, with more specifically with how it was it was designed. When we arrived at the site we were told we were not allowed to stand on top of the blocks but we were allowed to walk through them. When I walked through it felt like you were being absolutely consumed by a sea of white pillars and every corner was met with the question of what’s around?

The floor was very bumpy, so it was at times weird to walk around. This I believe was representing the difficult road Jewish people had to suffer on at the time. It was designed by the architect Eisenman after he won the second competition after the first competition was left with two designs that were over the set budget. He won together with the artist Serra. Their design originally envisaged a huge labyrinth of 4,000 stone pillars of varying heights scattered over 180,000 square fees. Serra ended up quitting, citing personal and professional. Among other changes, the initial Eisenman-Serra project was soon scaled down to a monument of some 2,000 pillars.

Personally, I believe that the memorial is a perfect tribute. Each stone is a different shape and size, representing uniqueness and the sameness of the people who were murdered. Finally, the walkway represents that of a labyrinth, which the architect wanted people to feel whilst wandering through, feeling lost, disorientated and confused, just like Jewish people felt.

The next site that I found fascinating was the Brandenburg Gate. The Brandenburg Gate is an 18th-century neoclassical monument in Berlin, built on the orders of Prussian king Frederick William II after the successful restoration of order during the early Batavian Revolution. This is one of the most important monuments in the entirety of Berlin, representing over 200 years of history, Germans from east and west Berlin would climb to the top during the cold war to catch a glimpse of what life was like on the other side of the iron curtain. The charity, pulled via 4 horses, is carrying a woman carrying a staff with the Black Eagle which used to lay on the Prussian flag. I believe that this statue can have many different interpretations in which people can see it as a sign of unity within Germany, or of a display of old-time Prussian dominance over central Europe. Behind the gate, there is a massive open road which to me, symbolizes unity and openness with what Germany is now, the statue uppon the gate holds up the Prussian black eagle, which to me highlights the fact that the admired political and military strength of Prussia, has now been lifted and shinning over what is now a united Germany. 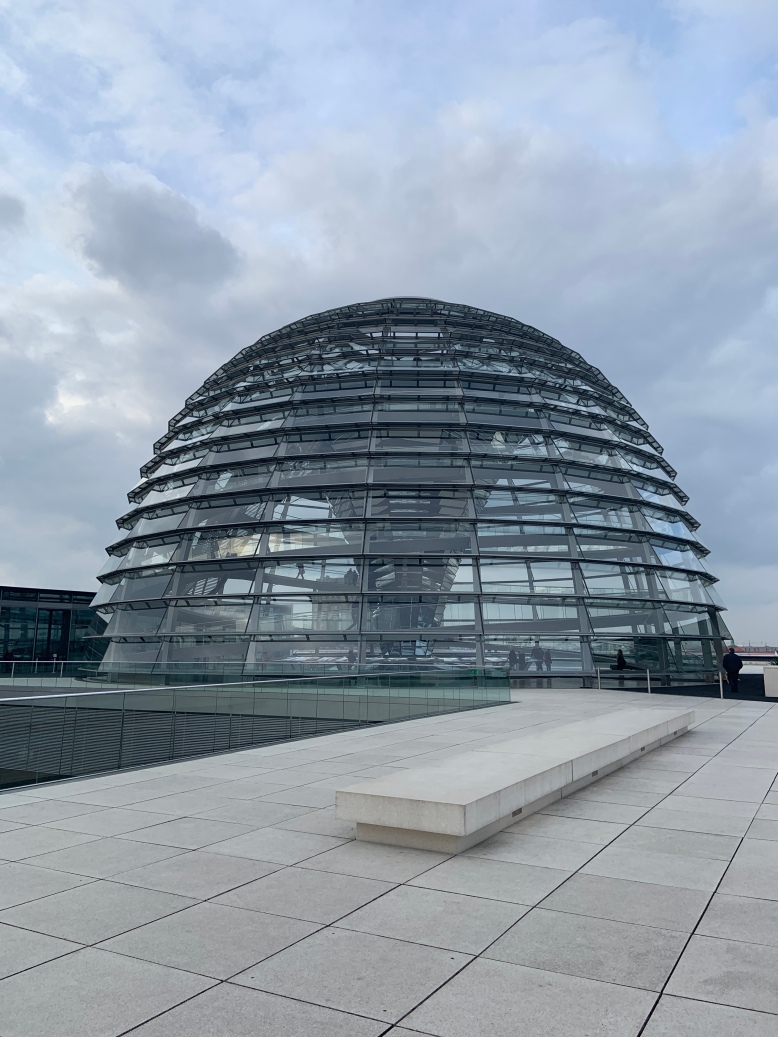 Top of the Reichstag

This is the top of the Reichstag, which is strangely holding a gigantic glass dome with a 360 view of the city of Berlin. The dome was designed by Architect Norman Foster to be environmentally friendly. A massive sun shield tracks the movement of the sun electronically and blocks direct sunlight which, wouldn’t only cause large solar gain but also amaze those below. The dome has a huge spiral walkway which takes you up to the top which arguably, presents the greatest view of Berlin. The overall design of the dome is to represent a futuristic and transparent Reichstag, pushing Germany away from their horrific past (Nazism). The dome presents a more united and democratic Germany.

looking down onto Parliament

One of the greatest aspects of the Reichstag dome is its core, which contains a transparent view of the German Parliament. Personally, I found this extremely fascinating as most Parliaments around the globe will keep debates behind closed doors (e.g the UK house of commons and lords), this represents the openness of the post WW2 and Cold war Germany. The mirrored centre cone actually directs sunlight into the building, and so that visitors can see the working of the chamber.

One thing I had never done and absolutely, never expected I would do was actually watch an Opera. Never the less, we visited the Berlin Opera house to watch an Opera called ‘Carmen’. The story of Carmen is a gipsy girl named Carmen who gets into a fight at the factory she works at, and before she can get arrested, she falls in love and manipulates the army Corporal of Dragoons called Don Jose. Don Jose and Carmen end up falling love and Carmen convinces him to desert the army to follow her in a life of crime. He does and as events unfold, she falls for a famous Spanish bullfighter named Escamillo. She leaves to watch him fight and Don Jose meets her outside the arena. As Escamillo kills the bull and cuts out the heart, Don Jose does the same to Carmen.